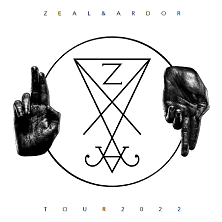 The sound blew out twice during the 50 minutes Zeal & Ardor was allotted, leaving SwissAmerican bandleader Manuel Gagneux and his backing musicians to troubleshoot as best they could on a silent stage facing hundreds of expectant faces. After the PA had sputtered out for the second time, Gagneux turned to the audience, his slight frame and clouds of black hair silhouetted against the blue lights and mounds of gear, an apologetic grin upon his face. Then, up from the crowd, came a ragged handful of voices, singing the chorus to the chillsinducing title track for his breakout album in unison: ”Devil is fine.” He leaned forward, and answered them—”Little one better heed my warning”—in that booming, bluesy voice of his, and the audience finished the couplet for him. He sang back the next line, and back came the thunderous chorus, rising from several hundred throats.

That call-and-response only lasted a few seconds, but its impact reverberated through the rest of the festival. Word of mouth is crucial for a band like Zeal & Ardor—a bedroom project-turned-juggernaut that rose to hyped-up prominence in a matter of months and is sustained by fan interest instead of major label machinery—and those 50 minutes in that church cemented the band’s reputation as The Next Big Thing in Metal.

“Having such a potentially devastating moment turn into such a supportive one is only a testament to the crowd of that festival,” Gagneux demurs, selling himself a bit short as is his habit. Lest we forget, Gagneux possesses an incredibly powerful, versatile voice, as well as a thoroughly original sound and the chops to pull it all together seamlessly. At the main event, despite all the setbacks and pre-show jitters, Gagneux and his crew did just fine, and really, it shouldn’t have come as any big surprise.

After all, he’s got the Devil on his side.

Like nearly everything else about Zeal & Ardor, Gagneux’s discovery of his remarkable vocal style was a happy accident. His approach to songwriting now isn’t quite as unorthodox as it was in the beginning, when he was idly whipping up joke songs to appease his fellow music nerds (and to mess with trolls) on online cesspool 4Chan’s music board. As a result of a racist comment, he stumbled onto a winning combination: a purposefully unholy conflagration of African-American spirituals, chain gangs songs, the blues, and Satanic black metal that drew lines between Scandinavia and the Delta, summoning both the blasphemous evils of the North and the bloodstained history of the South. Radicalis Records in Switzerland offered to release the project’s debut full-length, Devil Is Fine, in 2016 (with the Netherlands’ Reflections Records handling a limited vinyl release), and things snowballed from there.

“I think there’s a connection between the two [genres]; it’s a form of rebellion,” he said back in July 2016. “Even if slave music isn’t exactly defiant, it’s still like the triumph of the will of the people. I think there are parallels with, say, Christianity being forced upon both the Norwegians and the American slaves, and I kind of wondered what would’ve happened if slaves would’ve rebelled in a similar fashion to Burzum or Darkthrone.”

Since the release of his breakthrough album, Devil Is Fine, he has been the subject of much attention in the metal world, ranging from fawning praise to damning grumbles about trends and “fake” metal. As a biracial Swiss-American—born to a white Swiss father and black American mother—he falls so far outside the narrow profile of a stereotypical black metal musician that he’s even been accused of “appropriating” black metal, which is even funnier when one considers where all heavy metal and rock ‘n’ roll came from in the first goddamn place: black musicians.

The past year has been a whirlwind for Gagneux and his band, with invitations to play massive festivals like Reading and Leeds colliding with offers to open for Prophets of Rage and Marilyn Manson. He’s assembled a crack music industry team of high-octane publicists and booking agents who coordinate with his manager and record labels MVKA in Brighton, UK and Radicalis in Basel, Switzerland, who have helped guide him through the pitfalls of unexpected stardom. Zeal & Ardor made its debut North American appearance at Psycho Las Vegas 2017, with a short run of tour dates tacked on, including a NYC date at heavy metal haven Saint Vitus. Now, he’s preparing to take Zeal & Ardor on the road.

“This year is mainly going to be us touring and me writing where I find the time to do so,” he explains. “We get to play festivals that we couldn't afford to go to, so all in all that's pretty goshdarn neat.We haven't toured extensively yet, only had legs of 4 to 7 days, so we're trying to get accustomed to the thought of the vagabond lifestyle. I, for one, am very excited.”

With everything he’s been juggling, it’s a mystery how Gagneux had time to get down to the business of writing and recording his next album—but, he pulled it off, and the result, Stranger Fruit, is a tour de force in the making.

“I try not to have an audience in my head, because I think that’s what made the first record mean something. For Stranger Fruit, the thought was to have the two elements contrast each other, but also have them homogeneous at times,” he explains of the album’s genrehopping. “There was more leaning into the extremes of the two genres this time, so at times there is a greater discrepancy and at times they congeal in interesting ways. I wouldn't say it was hard, it's the most interesting part of making this music, but it did take a lot of trial and error as well as iteration to get it to a point that I liked.”

“I did the writing myself, but had producer Zebo Adam help me out with guitar sounds, micing etc. the only other musician on the record is Marco von Almen who also provides his drumming to the live band. Finally Kurt Ballou mixed the record and unsurprisingly did a stellar job at it.”

Stranger Fruit, is a masterful blend of the darkest Delta blues, soaring gospel, and icestorms of blackened metal. On this album, Gagneux has refined his genre-spanning sound into an utterly cohesive signature, one that transitions seamlessly between its elements and embraces even more outside influences, electronic and organic alike. Devil Is Fine was a welcome surprise, but Stranger Fruit is a full-fledged manifesto, down to the provocative title that recalls jazz icon Billie Holiday’s unforgettable, smokey tribute to the Black lives stolen on Southern soil. On Stranger Fruit, Zeal & Ardor has found its soul.

Though Gagneux says he hates the word “responsibility,” now that his work is so wellknown, he’s been forced to reexamine it through a different prism, and to understand how it fits into the conversations about race and culture and metal and how they all intersect that Devil Is Fine sparked.

“It’s not a bad outcome,” he mused. “I’ll put it this way: if this had happened five years ago, I don’t think I would have had the experience to approach it the right way. [Now], if that’s what I get to do, I should do it, but I have to do it in the right way. That’s why I have to think about what I stand for. I can’t afford to fuck up—people actually listen to me now.”

“Black metal is very protective of their culture, because it used to be a dear and secretive thing,” he says, a faint smile curling his lip. “Now it’s in the open to a certain degree. It used to be the most aggressive and extreme thing, [but] it isn’t anymore. It has to evolve—and I don’t know how exactly—but we should fucking try at least.”

That commitment to change is something, at least—a glimmer of light in a world that so often intentionally plunges itself into darkness.